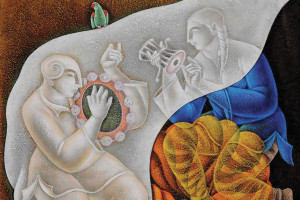 In Hasan’s world, the composition of poetry was entangled in contestations of political sovereignty, even as the poetry of patronage was giving way to the verse of mystic union. The literary idiom cultivated by Hasan and his contemporaries viewed spiritual longing through the prism of worldly desire, as can be seen by the many meanings attached to erotic desire in the poem translated below. These developments within Persian literature, in particular the shift from the court to the Sufi lodge (khaniqah) and the school of flattery to the discourse of the heart, cannot be separated from historical shifts in literary production and the new sources of political power. Like other poets of the Delhi Sultanate (1206-1526), Hasan left a divan (collected verse) rich in panegyric odes, but it is his lyric verse that has earned him permanent renown.

The poet’s full name, Amir Najm al-Din Hasan Dihlavi ibn Khwaja ‘Ala al-Din Sistani, indicates that his father was from Sistan (also known as Sijistan), an area that encompassed eastern Iran and southern Afghanistan. Hence his name Sijzi, meaning from Sijistan. According to his own testimony, Hasan began writing poetry at the age of thirteen. His major influences included the Persian poets Sa’di (d. 1291), best known as the author of Gulistan (‘Rose Garden’) but also a pioneer of the ghazal form, and the mystically inclined author of many quatrains (ruba’iyyat) Abu Sa’id Abu al-Khayr (d. 1049). While still a youth, Hasan became publicly known for his verse. His trajectory to fame began with his encounter with Delhi’s most famous poet, Amir Khusrow, at a baker’s shop in the city. When the sixteenth-century historian Fereshta described the meeting of the two poets, he referred to Hasan as Khwaja (‘teacher’), a title by which he was known for much of subsequent history. As the title suggests, by the early modern period Hasan was regarded as central both to Indo-Persian literature and to the history of Indian Sufism.

Since my lover parted two days have passed.

Every joy left this body when he parted.

Like a bird torn from its nest, I lament

separation from my beloved’s door.

When life was severed from the body,

it became impossible to part from the beloved’s door.

Observe the city, killed by the arrow of my lover’s glance:

Time yearns for blood, while the grief of

my beloved’s departure is killed by stars.

Since it is my fate to be killed by grief,

I am severed from sorrow, stars, and time.

Observe Hasan: far from his beloved,

unaware of his heart, far from home.