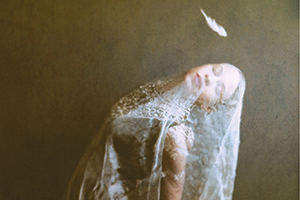 When the Hebrew slaves fleeing Mitzrayim (Egypt), literally “the narrow place,” on the way to freedom, found themselves lost in the wilderness, hungering and thirsting, a strange food appeared with the morning dew. Abundant, given for everyone. Fresh, shining with light. And quick to spoil. It had to be gathered and consumed while it was still alive. “Manna” they named it, but they could say nothing more, for to each one it tasted different—to an infant, like milk from its mother’s breast; to mothers and warriors, like camel’s milk; to young men and women, like bread; to the elderly, wafers baked with cardamom; to the sick, fine flour mixed with date honey; to the embittered, rancid linseed; to the fearful, unripe tamarind; to sages, carob; to seekers, fermented grapes, and to lovers, the lips of the beloved.

The obstacle blocking my path, the existential terror of a female-bodied-being, aided and abetted by an intellectual, self-confident skepticism of all language about women and the adequacy of all received language for women’s experience, was removed by what al-Ghazali calls “fruitional experience” (al-dhawq), “taste” or “tasting,” immediate experience. It was not ecstasy, that experience; it was a shattering of the heart. It was loss. Loss and more loss. Loss when it seemed there was nothing left to lose. And loss yet again.

Shattering was not the only fruitional experience that helped silence the voice of terror. The other, far more difficult to speak about, was mothering. I don’t know whether al-Ghazali or Rabi’a ever recognized that being a mother could be a fruitional experience. It took me decades of being a mother to wake up to its spiritual workings. Paralyzed by fear of becoming my mother, a crusher of selves; blinded by determination to be more than a mother, to realize my full potential as a woman, a mind and a force to be reckoned with, not just a body at the service of others; dismissive of women, feminists, societies, and religious traditions that praised mothering as noble, nurturing, selfless and self-sacrificing.

Shattering of self, opening of the heart—these two, after many seasons of barrenness, bore fruit. Terror subsided long enough to lay my neck down and begin to accept being extinguished. And with that extinguishing begun, everything began to change. What had tasted bitter became sweet. What had tasted like bread became cakes made with honey. Water became wine. I tasted everything anew, especially those things familiar and dear to me.

See our Store for more.