For most people it is difficult to conceive of gender and sexuality as social constructions based on one’s cultural landscape and worldview. Rather we tend to see gender and sexuality as natural/normal phenomenon with a fixed set of meanings. The following interview with Alex Wilson, an Associate Professor and the Academic Director of the Aboriginal Education Research Center at the University of Saskatchewan, offers valuable insights into the intersection between spirituality and gender/sexuality in the Opaskwayak Cree Nation. In this First Nation’s holistic worldview, queer, feminist, and environmental activisms are important to the spiritual identity of the culture.

SN: In your explanation, your definition of your spirituality, you talk about connectivity, you talk about relational accountability, reciprocity. In your writing you talk about a holistic world view. Does love have any place in your tradition, like in the Sufi tradition, in many traditions, in ways of interpreting those traditions, love is the purpose of creation. How does that translate in your culture? AW: Absolutely, that’s the natural order that everything else hinges upon. There’s an understanding that, again, continuity between the wider cosmos and our existence here on Earth and our ongoing creation stories that this energy, a great mystery, is really about love. And there are actual laws or ways of being that are built around that, and as mentioned that’s a central one, so sakihiwawin is a natural order that says that you should love in your actions. When you don’t follow that kind of natural flow there are consequences. There are consequences or implications that kind of hinge on that so there’s pastahowin and otchiniwan meaning that on a physical/material level, there are consequences. So, for example, in the far north, where there is frost on the ground all the time, when you step on the ground you can, literally your footprint can be there for a hundred years. It’s always there and you can literally see your imprint on the earth. That exists everywhere, it’s just that we can’t see it. It is more prominent in the far north. You become very cognizant of the relationship with the land when you see the imprint that you’re making. That’s like “for every action there’s an equal and opposite reaction” so that there are consequences for the way we act and behave and there’s consequences on that material level.

What kind of education has been needed in the indigenous communities around gender and sexual diversity to facilitate “coming in,” and how does it relate to the internalization of gender and sexual norms imposed by white colonizers? And how receptive has the community been? I’m kind of fortunate that I grew up in a community that has a lot of “out” people, or people that are openly queer, so there are those people that came before me. But there’s always been this continual thread of resistance to colonial forces and I would say that continual thread is our spirituality. That’s always been there and sometimes you have to just look a little harder to find the people that embody it or that connect to it and for many people they are unable to find those folks and find an extremely high suicide rate for two-spirit people. Sixty percent of trans-identified Native Americans have attempted suicide and the suicide rates for two-spirit-identified people are ten times higher than any other population in Canada. It’s a serious, serious thing. 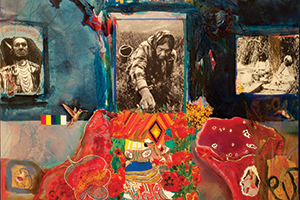 But it is a serious thing because these trans-identified kids are dropping out of school as early as third grade. That’s an active form of resistance. That’s healthy. What would make a third grader not want to go to school? Well, something as simple as being afraid to use the washroom. Not a safe space. Homelessness rate is extremely high for two-spirit youth and adults. Those realities are there so we can’t really ignore them and say that we’re accepted when in reality many people aren’t, so it’s an ongoing thing. I think once people do realize and recognize that we do have a place within our traditional societies as well, then at least we can say, wow, we do belong here.

My last question relates to what most people think of as Western concepts, like feminism or queer… obviously your formal education is a Western education. You graduated from Harvard, so borrowing these concepts… Do you have to reconcile that with your spiritual tradition somehow, or do you even consider these concepts as Western concepts? To me there’s no reconciliation because those concepts exist already in our language. Feminism exists within our language so we have that concept of everybody being within the circle, we have an analysis of power, and in fact, Western feminism came from indigenous women.

But could you explain a little bit more about your definition of feminism? I don’t have a definition, but I do have a contextualization and that would be our philosophies or ways of being that are around this notion of showing love in your actions, then there’s these consequences when you don’t really examine or do an analysis of power dynamics.

See our Store for more.