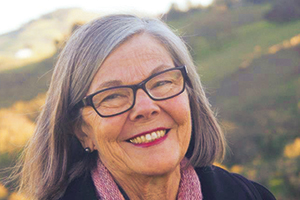 Carol Lee Flinders is the author or co-author of at least twelve books, beginning with the iconic Laurel’s Kitchen vegetarian cookbook. She has written many books on spirituality and women, among them the influential At the Root of this Longing: Reconciling a Spiritual Hunger and a Feminist Thirst and Enduring Grace: Living Portraits of Seven Women Mystics. She lives in the San Francisco Bay Area in a spiritual community, and continues to write and teach at nearby universities.

Flinders has worked hard to take the condition of women all over the world into account. All three interlocutors are well aware that the privileges and challenges faced by rich women are very different from those faced by poor women, and that cultural and societal expectations vary tremendously globally and locally. A further insight is that “women” are not the only people who are gendered—feminism is for people called “men,” too, as well as for anyone else who is seeking the truth of both the relative and absolute expressions of life. During the conversation it became obvious that the primordial feminist slogan, “the personal is the political,” is as true now as ever. When it comes to feminism and discussions about gender, theoretical concepts touch nerves.

SN: What would have to happen for women to feel themselves able to make the sort of choice that spiritual practice requires?

CF: For decades it’s been argued that the struggle for women’s full inclusion is really a struggle on everybody’s behalf: “A world that’s safe for women is a world that’s safe for everyone.” But in the past we didn’t have the hard data to back that up. Now we do. In the 2012 book Sex and World Peace, four well-credentialed scholars revisited conventional ideas about what constitutes national security: What makes it more or less likely that a nation will break out in internal violence, or attack other nations? Typically, we’re advised to look at the level of democracy, or prosperity, or the intensity of ideological clashes; but Professor Valerie Hudson and her co-authors draw on masses of cross-disciplinary research to propose that the key predictor is, in fact, the position of women within that nation. Countries where women are systematically underserved, marginalized, and/or endangered are also countries whose leaders are more likely to react violently to external and internal crises. Give women a break, and everything gets better: food security, health, even the GDP! Place women in positions of national leadership and things start to stabilize: there’s less enthusiasm for military action, and more for taking care of the citizenry.

The struggle women have undertaken worldwide—for dignity, justice, full inclusion—is not just social or economic or political. It’s fundamentally spiritual, because it’s about how willing we are, and how able, to see “the Self,” or “the Beloved.” Like racism, sexism is just too deeply lodged in human consciousness to yield to ordinary political processes. Contemplative practices can yield the humility, the patience, and the capacity to stay engaged over the long haul that we’ll need to end either of those scourges. Social problems are spiritual problems.

SN: But also it’s important that your genealogy—you started with Enduring Grace—the women who were obviously recognized as spiritual women…

CF: They were so unbelievably courageous—breaking precedents left and right. I love the fact, too, that in almost every one of these stories a man turns up—a brother or friend or confessor—who was pivotal to the whole process, so secure in his sense of himself that he didn’t need to bolster his own identity at anyone else’s expense, and so authentic in his own religiousness that he could recognize the real deal when he saw it. Given the long reach of patriarchy back then, the support of at least one man may have been critical. And the stories of those friendships—so charming.

That’s what I see in these women and men—they were just taken over by love—helpless to resist the deep truth of life’s unity. They can’t not model it for the rest of us. And the beauty of it all is that there is a kind of contagion. This is why we want to hang out with great teachers. As my own teacher used to say “spiritual awareness isn’t taught, it’s caught.” On our best days, we can get infected!

See our store for more.