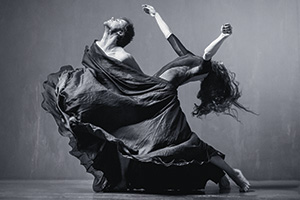 St. John of the Cross’s Noche oscura and a Trace of Love
by Mary Gossy—

I started to talk about St. John of the Cross’s poem “Noche oscura,” or “Dark Night,” and what the phrase a lo divino meant for sixteenth-century mystics of Spain like him and St. Teresa of Avila.

John uses many allusions and poetic devices from the top sixteenth-century hit-maker, Garcilaso de la Vega, who introduced to Spain that Italian innovation, the sonnet, and with it a whole vocabulary of lyrical possibilities. John of the Cross took Garcilaso and turned him to holy purposes.

But given all the yearning and desire for union, figured in Christian mysticism as “spiritual marriage,” in which two become one, I found one verse of “Noche oscura” vexing: amada en el amado transformada. I said to my friend, generally reliable in literary matters, why, if union is effected, does that little ‘a’ remain at the end of transformada? Amada, feminine, is transformed in amado, masculine, and yet how complete can the transformation be if that “a” of feminine gender remains, even if only grammatically and orthographically? And why should union mean that the feminine becomes masculine, anyway? If it’s really a transformation, should not something happen to the “o” of Amado?

Dr. Javad Nurbakhsh’s The Path, a comprehensive guide to Sufism, explains that “In and through God’s love the Sufi lets go of everything, even this letting go.” How this happens is imperceptible to the intellect and emotions. According to St. John, that is because it happens at night, in the dark. In fact, it is the night “more lovely than the dawn” (stanza 5, verse 2) that makes things happen: “O noche que juntaste/ amado con amada/ amada en el amado transformada”—“O night, you ‘hooked up’” (juntaste) beloved (masculine) with beloved (feminine), beloved (feminine) transformed in and into beloved (masculine)” (stanza 5, verses 3-5).

The ungendered English elides two Spanish meanings. One is the double possibilities of “en”: in Spanish “en” can mean both ‘in’ and ‘into.’ The second meaning elided in the translation is the gendering of the two beloveds, one masculine, one feminine, and along with it the aural and visual inversion of the words in the last two verses: “amado con amada, amada en el amado transformada.”

See our store for more.