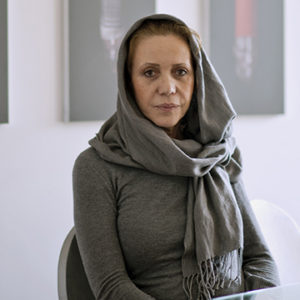 is an Italian-born multimedia artist working with photography, sculpture, video and installation, who lives between Verona, Milan and Dakar. In the early 1990s, Guerresi traveled to Africa, where she encountered Muslim culture, and eventually joined the Senegal Muridiyya Sufi order. Over the last two decades, her art has focused on empowering women and exhibiting a context of universal human values and conditions that is situated beyond psychological, cultural, and political borders. Maïmouna
has been extensively exhibited in solo and curated shows all over Europe, America, India, and the Middle East. maimounaguerresi.com.

Microsoft has shown off parts of its Xbox One dashboard previously, but the company has now started to demonstrate it fully with just under a month until the console is released. In a new video briefly posted to the official Xbox One site, Microsoft demonstrated apps, games, and TV switching from the very start of powering up the console to switching it off — all with the voice-enabled Kinect camera. We’ve seen dashboard demo leaks, but this latest official video details the login experience and navigation around the dashboard to launch various apps and games using Kinect.

Xbox One’s “Game DVR” service, which lets you capture gameplay and share it over Xbox Live, is also demonstrated in the video. Switching to TV appears to be near-instant, with apps like Internet Explorer also snapping into place speedily. It all looks impressive if it works this quickly and smoothly in reality, but it’s not clear if this is just a marketing video that speeds up scenarios. Microsoft hasn’t placed the usual warning on its video. Previously, the software maker has demonstrated its Xbox One friends app, with Twitter-like followers and feeds, and previewed its dashboard behind closed doors. As the company moves toward the November 22nd release date, we expect to see a lot more about apps, TV integration, and game switching. For now, this video offers up the latest glimpse at how the Xbox One will operate.

Hugh Jackman’s take on Wolverine has always been one of the most enjoyable elements of the X-Men film series, but recent movies have failed to match the quality of the actor’s own efforts. Brett Ratner’s X-Men: The Last Stand was a dumber, shallower adventure than Bryan Singer’s first two entries, and X-Men Origins: Wolverine drowned the character in a pedantic story and a barrage of bad visual effects. Now, with Wolverine’s headlining efforts in need of a reboot, comes James Mangold’s The Wolverine.
[youtube]https://www.youtube.com/watch?v=ByIzJAgOV2M[/youtube]

The difference in approach is apparent straight from the title itself. A streamlined, introspective take on the emotional perils of immortality, it’s a superhero film that’s not afraid to see itself as more of a noir-infused character piece than an action set-piece generator. It’s a welcome approach, and the film sings at first as it’s able to deliver on both fronts — but The Wolverine is ultimately unable to balance the two elements, collapsing upon itself in a heap of comic-book absurdity.

The story starts some time after the ending of The Last Stand. Wolverine — “Logan,” when he’s not in a fighting mood — has gone off the grid, haunted by the death of Famke Janssen’s Jean Grey and committed to leaving violence behind. He’s shaggy and unkempt; Jean Valjean with adamantium claws, and when the brutality of some local hunters raises his hackles a mysterious woman named Yukio (Rila Fukushima) steps in. It turns out she works for Yashida, a wealthy Japanese tech mogul whom Logan saved from atomic annihilation back in World War II. The elderly man is dying, and wants to bring Logan to Japan to say his final goodbyes.

After arriving in Japan, Logan learns that Yashida actually has a proposition: let me take your healing abilities for myself, he says, and you’ll have the chance to live a normal life. Logan declines, but when the Yakuza try to kidnap Yashida’s granddaughter Mariko (Tao Okamoto) during the mogul’s funeral, Logan steps in to rescue her. They’re soon on the run, with one very important wrinkle: Logan’s regenerative abilities appear to have stopped working.
The setup may sound complicated, but it plays effortlessly on the screen. That’s in large part to director James Mangold (3:10 to Yuma, Walk the Line), who brings a steady hand and a grounded sense of reality to the film. The movie takes its time — the pre-adventure sequence with Logan is particularly patient — and never feels the need to rush things along just for the sake of quick-fix spectacle. Mangold mixes influences from noir, westerns, and martial arts films in a kind of genre alchemy, framing the wandering Wolverine as a ronin — a samurai without a master or purpose.

That’s not say the film doesn’t deliver on the action front. By and large, the fight sequences are choreographed spectacularly — real people performing real stunts, relying on fierce swordplay and the kind of skilled hand-to-hand combat that feels abandoned all too often in the name of wire-fu and fantastic effects. Things get bumpy when the action opens up — a fight atop a bullet train begins to stretch credulity — but even then the results are tremendously entertaining.

Jackman, as always, is the bright and shining constant. It’s the same experience as watching Robert Downey Jr. in the Iron Man series; it’s impossible to not enjoy watching him play this role. He gets every snarky comment and jab just right, all the while delivering on the ferocity and fierce physicality the role requires.

Unfortunately, a single actor can only do so much, and a large part of the story relies on Logan’s inevitable attraction to Mariko. While Okamoto delivers an engaging performance unto herself, there’s almost no chemistry between her and Jackman, and whenever the movie leans on that relationship things grind to a halt. It’s even worse when contrasted with Logan’s chemistry with Jean Grey in the movie’s brief dream sequences; when you’re in the audience rooting for the lead character to not get over his feelings of guilt, you have a problem.

For Issue #84 of SUFI we spoke to Louis Lefebvre, artistic director of Heliofant productions, the animation outfit behind the short film I Pet Goat, II which created a viral whirlwind of speculation when it was released online last year.