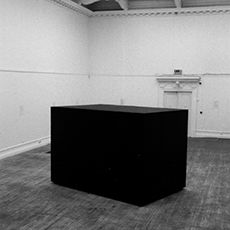 I quickly realized that Aristotle’s pithy aphorism that “Nature abhors a vacuum” holds just as true in art as it does in science. I was invisible and inactive. There was nothing to see. And yet I found that people flooded the nothingness with their own stories. Sometimes the less you do the more people see. Just as air rushes into a vacuum so people fill space with imagination. Many people perhaps imagined I would be found crumpled in a corner of the box when it was opened, an anguished skeleton. Others might have imagined I would flutter out on angelic wings with a beatific smile. Some told me that my incarceration threw into sharp relief the number of dinners they ate or TV shows they watched during that ten-day period in March, 1998. Even my own imagination played tricks on me.

The Sufis refer to God as the Friend (dūst). This is based on the Koranic verse yuhibbuhum wa yuhibbuhunah (God loves them and they love Him, 5:45), which is interpreted by the Sufis as meaning that it is God’s love for us that gives rise to our love for Him.