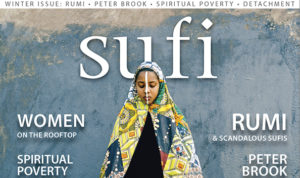 In a time when attachment to the world and its wealth seems to many to be out of reasonable control, Winter Issue #88 SUFI explores the many facets of the act of detachment, and how the art of letting go creates a gateway to love.

In his discourse, Alireza Nurbakhsh highlights the distinction between indifference and detachment, concluding that true detachment from desire and acquisition is only possible through love. Mary Gossy’s account of living with the Poor Clare nuns explores how one tradition rejects material possessions to attain spiritual poverty. Sister Miriam MacGillis considers how the creation of a winter solstice ritual opens a pathway for a renewed way of relating to the earth. Jawid Mojaddedi examines the path of ‘explicit’ Sufis, who do away with attachment to entrenched dogma in order to teach consciousness to an evolving humanity. Safoura Nourbakhsh analyzes gender relationships in sama’, a form of Sufi meditation to music where aspiring male mystics in 11th-century Iran might have been moved and vitalized as much by the presence of onlooking females on rooftops as by the detached power of the music itself. Michele Rousseau describes how the act of turning inward, common to both psychoanalysis and Sufism, allows for the creation of a narrative not born of attachment to the self. Jan Shoemaker offers a fascinating and erudite chronicle of her inner journey as she comes to understand the significance of transitions in her life. A large part of SUFI’s CULTUREWATCH section is dedicated to Peter Brook, one of the seminal figures in modern theatre and author of The Empty Space. Joe Martin authors the review of Brook’s life and works.