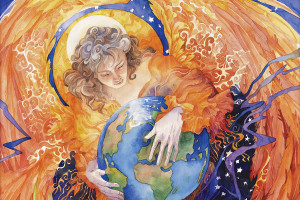 A Conversation with Matthew Fox
interviewed by Joe Daoud Martin

In his many decades of engagement with interfaith work Matthew Fox has been at the intersection of all the mystic spiritual paths: particularly those paths that involve both inner work and outer engagement with all of creation. Early in life he was drawn to the Dominican Order, and inspired in part by Thomas Merton, entered for a while into the life of the hermitage.

In his books, Fox works with the key idea of the “Cosmic Christ,” that points to the potential for everyone to realize the spirit within. “Creation Spirituality” focuses upon four related paths drawn from the traditions of Christian mysticism: The Via Positiva, Via Negativa, Via Creativa and the Via Transformativa, which are discussed in the interview.

MF: I was already in the Dominican Order when I made that foray into solitude in the hermitage. So the Dominican experience preceded that and in many ways seeded it, watered it, because training with the Dominicans was a lineage, a 700 year lineage, and there is a lot of depth there and a lot of beauty and I was moved by it and I wanted to spend more time in solitude. So, in a way I left the priesthood before I became a priest and that was a circumstance I have never regretted because I chose it. But I know I carried that experience with me, for my whole life, I guess. I told a friend that I ran on the energy that I derived from the hermitage for twenty years. It was a very freeing and powerful experience.

MF: Well, it gets you into a state of creativity because it empties you, and when we can be emptied, from time to time—and this is only one of four paths—you can go deep in it so it is also nothingness. But when you are emptied, then you’re ready to give birth. There is a great dream that Eckhart said he once dreamt… That a man was pregnant, pregnant with nothingness, and out of the nothingness Christ was born. So, I think that says it all. That creativity, as opposed to just reshuffling things creativity does come out of emptiness. Sometimes it’s gentle, but sometimes it can be very severe. It can be a breakdown, it can be Alcoholics Anonymous. It can be hitting the bottom. So then, who are we when we come out of it? How are we transformed by it?

The Via Transformativa is about transformation, about social transformation about justice, it’s about compassion, it’s about service. To get there, to build that warrior energy that it takes to be an effective, compassionate agent, you have to first of all be in love and that’s the Via Positiva. Secondly, you have to learn about letting go and letting be, and thirdly you have to gather your resources and creativity and learn the mystical experience of co-creation of the spirit. Creativity is a mystical experience, too. The image I always have of creativity is being on a raft down a rushing river without an oar. You’re there for the ride. But it’s fun. [chuckles] And wild things happen.

So you have to bring all that to the Via Transformativa— you don’t just show up and say I’m mad so let’s go do something. And that’s a problem. A lot of our efforts at justice come out of an action/reaction response. Out of anger alone. And anger has its place, but you have to feed it with healthy Via Positiva. That’s a skill, a discipline, and then creativity itself, you bring this to the table and then you have something to draw from. But it doesn’t even end with the Via Transformativa. The Via Transformativa is not an end in itself. It returns you to the Via Positiva. What’s the point of justice? It’s to make the table larger so that people can fall in love with the beauty of life, so you’re back to the Via Positiva. That’ why I imagine it as an ever expanding spiral so that you go through these paths time and time again, even in one day. But certainly in a lifetime. For me it makes so much more sense than the traditional language of purgation, illumination and union. First of all, that language is not Biblical, not Jewish, it’s not prophetic. It leaves out justice, it leaves out enjoying the light, it leaves out creativity. It leaves out a lot…

JDM: You have this phrase, actually it’s the title of one of your books, One River Many Wells, so all these different traditions feeding into one water, but underground there’s this coursing surge of spirit.

MF: Exactly. “One wisdom” as Nicholas of Cusa, in the fifteenth century, said. We call ourselves by many religions but in fact there is only one wisdom that is a “terrible beauty” he said, “a terrible beauty that is wisdom.”