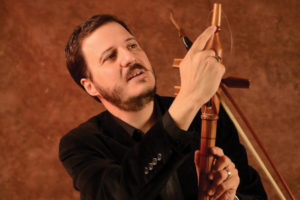 CultureWatch: At the turn of the millennium, successful jazz musician Mehmet Ali Sanlıkol embarked on an odyssey of discovery that would profoundly reshape his musical career as a composer and performer.

Fourteen years later in December 2014, Sanlıkol’s composition “Vecd,” a piece that channels the rhythmic and spiritual essence of Turkish Sufi music through the instruments and modalities of western orchestral music, was nominated for a Grammy Award. On the eve of opening his latest operatic project, Sanlıkol shared his story with SUFI.

How do you think audiences of Sufi music who haven’t had previous exposure receive it? Can the music communicate something deeper?

I think those deeper messages are going to reveal themselves as the human being himself or herself elevates their understanding as well. There will be meaning after meaning in the music. “Vecd” to people who are acquainted with Turkish Sufi music will have one meaning, and to other listeners it will communicate a different level of meaning, and with repeated listening it changes. This is so much in line with the idea of being on the path. It has so much to do with who the listener is. It depends on their cultivated number of life experiences and different musical languages. You observe and receive only as much as you’re ready to. Buy the current issue to read the entire article.