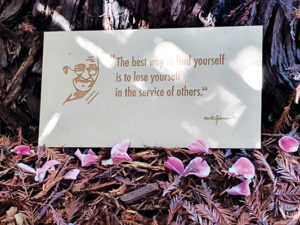 There are times when we find ourselves shrinking from life, from beauty, from the truth. From the story of love unfolding all around us, and within ourselves. It often happens in the moments where we allow the mind to transport us; when we allow the material world and language to determine the limits of our understanding and experience. As Mark Nepo describes, these tendencies can construct a prison of our own making, within which only sorrow and sadness grows.

This issue of SUFI explores the different effects of this retreat, and the routes we can take to return to presence.

The experience of beauty, writes Alireza Nurbakhsh, has the potential to cultivate divine love. Navigating the delicate line between worldly desire and divine inspiration in interpreting our experience of beauty, says Nurbakhsh, can be aided by the spiritual community and the guidance of a master. David Godman further expands on the importance of a guru. Sharing insights from his many years in Arunachala, India, he reflects on the importance of a guru not only for receiving verbal guidance, but also for “direct transmission”—quietening the mind and accelerating the process of awakening— most powerfully in silence. Yet is it precisely this silence which can frighten us most. In “Unoccupied Prayer” and Divine Love, Mary Gossy observes that “Doing nothing is not for the faint of heart.” It is in silence and complete surrender to God that the impasse of logic and over-thinking is overcome. By surrendering to “whatever breath of grace there is that moves the foot to take a step into empty air,” we can begin to walk a path beyond the limits of what the mind thinks is possible. Indeed, beyond words.

It is after this leap of faith that the heart and the mind can work together.  In his reflection on Rumi’s life and work, Jawid Mojaddedi unpacks the paradox of Rumi’s intellectual rigor and scholarly knowledge being both an impediment to spiritual insight, and also a powerful medium through which to communicate the importance of seeing the mind as a servant of the heart. Tech entrepreneur Nipun Mehta takes us one step further: from mind and heart to action. He shares his vision for change through service and how, by combining the head, heart and hands in everyday acts of kindness, we unlock the power to transform ourselves and the world. It is in the doing that we can become the “instrument of a larger flow,” find release from the anxieties of our ego, and become part of a collective consciousness that becomes community, generosity, equality and compassionate models of leadership— all shifting the cultural narrative from transaction to transformation. We hope you enjoy reading. We’re also releasing monthly doses of Sufi poems and music via our newsletter.