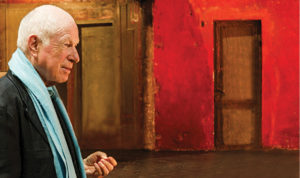 CultureWatch: Making the “invisible visible” is one of a few simple ideas with huge ramifications upon which Peter Brook would build over the decades. When he included this phrase in his 1968 book The Empty Space—now seen as a “Bible” of modern theatre among artists in the field—he was not referring only to spiritual realities, but also the worlds of thought and ideas, and the plane of emotions and imagination: all things in the life of human beings that are invisible or intangible. The bottom line for Brook then, is that theatre involves physical bodies moving in an “empty space,”—which led him to work with an increasingly stripped down sort of theatre, often done on dirt or simply a large carpet to demarcate the playing space.

At age 85, Brook mounted his final version of Estienne’s adaptation of the Sufi writer Amadou Hampaté Bâ’s memoire The Sage of Bandiagara, about Bâ’s own renowned Sufi teacher in Mali. “11 and 12,” was the title, though in 2005 it had been toured in the US in an exploratory production called Tierno Bokar. The team had worked with this material for over 20 years. The opening of the play focuses on Bokar’s wisdom as a teacher. Buy the current issue to read the entire article.