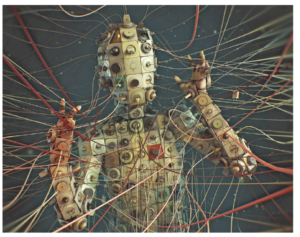 Truth Matters. That’s a complete sentence. It would take millennia to unpack it. Nimatullahi Sufi Order Master Alireza Nurbakhsh explains why and how truth matters, and the difference truth makes for science and the soul.

This issue of SUFI engages connections between experience and experiment. Evolutionary game-theorist Donald Hoff man makes a good argument that “evolution has not shaped us to see reality as it is.” He also speaks from a strong conviction that the scientific method is the way to get closer to the truth—the whole point of science is to create a proof, and then to be willing to be proven wrong. Using the language of mathematics and experiment, Hoffman assures us that, in the search for truth, “if we don’t have the arguments, we don’t have a prayer” of arriving anywhere near the truth. Practice, if not prayer, might lead the way.

Good training, for a long time, says Fred Cooper, can open the scientist to grace, and the mystic to precision—practice makes clear-seeing possible, and thus meaning arises. The scientists in this issue say that we have to practice, practice, practice: but the Carnegie Hall of spiritual experience is somewhere the taxi of grace drops us, not somewhere we get ourselves to.

Andrew B. Newberg’s neurological experiments on mystics show that surrender does what no exertion can—and also that exertion is necessary. What we decide to do matters. Truth matters—matter, material, mother—the words are leaves of the same plant, and Dani Kopoulos’s story unfurls them. Grandmothers and spiritual masters know things. They know how to turn on the light so that yellowing life can thrive again. It turns out that Grandmother and Master can see in the dark.

After performance artist Ansuman Biswas enters a black box and becomes Schrodinger’s cat for ten days, his eyes need to adjust to the light when he comes out; his ears hear stories from others about his experience that have nothing to do with what he knew in there, by himself, where he wasn’t, after all, alone. Truth shows itself in relationship. Love might come in there, but that’s another matter.